Fire safety is top of all our concerns. Councillor Sian Berry will keep you updated here on the latest news and work Greens are doing in Camden to keep residents safe, informed and involved in the management of their homes.

"As soon as the Grenfell disaster happened, the implications for Camden were clear. The same contractor had been used to clad towers on our Chalcots estate under a PFI deal, and residents in many of our buildings were concerned to know whether the failings of management, repairs and oversight seen in Kensington and Chelsea were happening here too.

"When the news came that not only was the same cladding fitted to the Chalcots towers, but that massive internal defects that would encourage the spread of fire had been discovered by the Fire Brigade, I and councillors from across Camden joined the huge effort to help people who had to be evacuated. From the work I did in the relief centre in Swiss Cottage that week, and through communication and visits with residents since, I know that there are still many questions and concerns, and I've been working to get these answered.

"I've also been calling for a fully independent review of what led to this crisis, which must be resident-led and comprehensive.

"Here I'll maintain an online resource for residents with key information and links, including any information released by the Council, the statements I have made and the questions I have asked."

I made the two Freedom of Information requests above to get more information on previous fire inspections at Chalcots and information for residents in Highgate's council blocks on what their most recent fire risk assessments have said.

Camden at first only published a partial 'composite response' to a range of FOIs it has received on Chalcots.

I put my requests in for 'internal review' as the first stage of appeal, and now the reviewer has concluded Camden should provide the documents - though they have not all yet been provided, and the Highgate documents show that many serious issues have been neglected for years.

I wrote to the UK Information Commissioner in July in my capacity as a London Assembly Member to ask her to issue advice to all councils on the public interest of releasing full fire safety information to residents. She wrote back in August and agreed with me, and has issued strong advice to councils to publish full information, saying "don't wait to be asked". Camden needs to listen to this advice now and give residents all the information they are asking for to be fully aware of how safe they are.

The Council has now released Fire Risk Assessments for blocks above 10 storeys - these are available on a map on its website here. Unfortunately none of Highgate's blocks are above nine floors and so they don't appear yet. 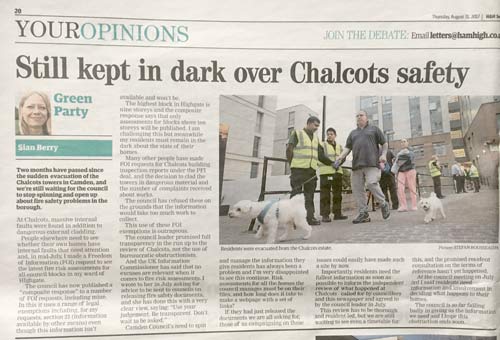 Further articles from the Ham&High:

Release all the documents: After Grenfell and Chalcots, we must have transparency

In this I call for full transparency, more resident involvement in major works across the borough and a fully independent, resident-led review of what happened to lead to the crisis at Chalcots.

Green councillor @sianberry says relief operation going well but challenge will be matching tenants with rooms that have been offered pic.twitter.com/uIGuzDIr5j

Read more on my website about my concerns that people were not heeding the call to leave the blocks because the council's communications were not clear about the advice of the London Fire Brigade.