Camden and London Green Parties have called for more space to be created for cycling, walking and buses by removing private motor traffic from Gower Street, not just Tottenham Court Road, in its response to Camden Council's West End Project consultation.

Camden Council plans to spend nearly £30 million on the West End Project, with the intention of making Tottenham Court Road and Bloomsbury safer and more attractive to residents. Proposals include removing the one-way system, Tottenham Court Road being restricted to buses, pedestrians and cyclists until 7pm, with two 1.5 metre segregated cycle lanes for Gower Street. 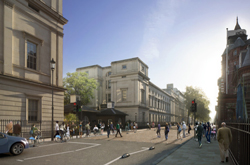 While Greens believe the current proposals are a step in the right direction, they don't provide the 2 metre cycle lanes needed for safe segregated cycling, and should go further to create space for efficient modes of transport by reducing space for cars on Gower Street as well as Tottenham Court Road to allow this.

The party's amendments would go much further in the direction of healthy modern cities such as Copenhagen and Amsterdam.

Key proposals from the Greens:

“The project as it stands misses the opportunity to build for a much more ambitious mode shift to cycling, public transport and walking on this crucial route through some of Camden’s most important public spaces and economic centres. We believe Camden should be planning boldly for the mode share we need in future decades, not for a slight adjustment to the prevailing conditions, especially when this results in less than ideal provision for pedestrians and cyclists – the modes that currently need most support.

"It’s a definite step in the right direction, but the improvements we are proposing will do more to reduce air pollution and benefit shoppers, office workers, visitors and the local student population, as well as thousands of residents."

"Redesigning Tottenham Court Road and Gower Street can play a fundamental part in making London a more liveable city where active travel and public health are prioritised over the convenience of the few making trips by car.

"Camden should be ambitious to make this scheme a step change improvement for central London with streets that are safe, pleasant and convenient for residents, workers and visitors whether they walk, cycle or take public transport."