Faced with mounting evidence of the potentially lethal properties of glyphosate, retail outlets are beginning to strip their shelves of the weedkiller. But Camden Council continues to spray RoundUp on paths and green spaces throughout the borough. Ask your local councillors why. 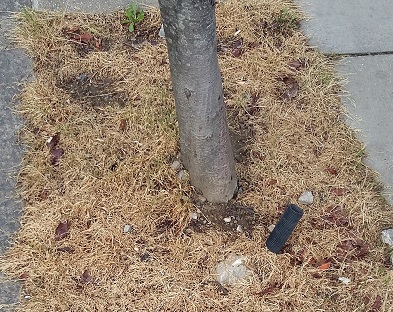 "But it's their best selling weedkiller, so why are they doing this?" you ask. They're doing it because glyphosate kills. It kills not only plants, but bees and other insects, birds, animals and people too. And that's not great for company image. Once the stores are rid of existing stocks, that's it for good.

Countless public authorities up and down the country and across the globe have also stopped stocking and spraying glyphosate, investing instead in safe, non-chemical foam-based mechanical methods, and simply rewilding large patches of green spaces.

But despite a deluge of complaints from outraged residents, Camden Council are refusing to budge. They are still spraying glyphosate with impunity. Why?

This week we hear from residents in Pandora Road, West Hampstead that the Sunflowers they planted around their street trees, to spread a little cheer during lockdown, are dying. Locals report seeing the Council's glyphosate team in action. We've asked the Council to confirm or deny any involvement. They haven't replied.

And it's not as if they have not been warned. Prompted by mounting evidence of the lethal toxicity of the chemical, the Camden Greens launched our campaign to ban glyphosate in the summer of 2018. Our 1000 signature petition Stop using toxic ‘Roundup’ weedkiller in Camden was presented by Kirsten de Keyser to Camden Council in October of that year. The petition is still attracting signatures and has now been signed by nearly 1500 Camden residents. Add your signature HERE

The initial trickle of evidence against RoundUp has become a torrent, as scores of US citizens start suing the makers of the weedkiller, Missouri based chemicals giant Monsanto. Dying of non-Hodgkin lymphoma and convinced that glyphosate was the culprit, Dewayne Johnson became the first litigant to win his landmark case against Monsanto in a California Court. Now thousands of US court cases are either won, active or pending. None have been lost so far.

So, as the Covid-19 pandemic is making us acutely aware of the quality of the air that we breathe, it's time to get active everyone!

Write to your councillors and remind them of our petition. We are winning this battle, so let's keep on keeping on! It's what we do.